DONNY DEWAR - OUR MAN WHO LAID HIS PIPES TO REST 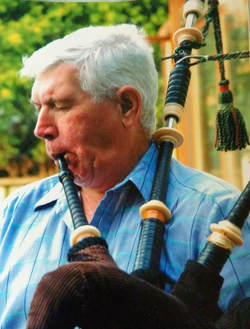 Donald Brown Walker Dewar finally laid his pipes to rest on January 13, 2015. He passed peacefully with his family beside him. Donald was a devoted husband to Elizabeth, loving brother to Annette; proud father to daughters Eleanor and Fiona; fond father-in-law to Justin and Evan; doting grandfather to Cieran and Eoin; a treasured friend, a talented teacher and a professional piper.

From a very early age, Don learned to strike in the bag and blow steady, harmonious drones. In his early years, he competed with the Goderich Pipe Band, followed by the Guelph Pipe Band and later in life, he was a member of the Grand Celtic Pipe Band of Fergus, Ontario. Don, ever the teacher, passed on his legacy of piping to his daughter Fiona and she proudly carries on the tradition.

Don piped up, down, in and out, and if pictures are to be believed, there is even evidence he piped all of the neighbourhood children to the corner pig roast, like some modern-day version of the fairy-tale. He played countless Burn’s suppers, weddings and funerals, competitions, graduations, pubs, ceilidhs, backyards and farms; and, he very nearly played in a holding cell at the local police station!

But no matter the venue or occasion, Don was the consummate professional and had a beautiful musical sense. For someone with no formal musical training as a child, the music he made with his pipes was astounding!  Really good musicians are rare; really good musicians who can move you from tears to laughter and back again in mere notes are a whole other category of special – Donald Dewar was a whole other category of special and he will be greatly missed.